We caught up with Raz Ghafoor, Co-founder at start-up ThirdEye. He shares how he turned his belief that AI will change the world into a game-changing business that fights theft.

ThirdEye based at East London Works uses intelligent computer-vision software in the retail sector, analysing CCTV footage to detect and notify staff in real time of situations including queues, theft and stock-outs. Its “distributed camera mechanism” captures images that can then be analysed by ThirdEye’s AI technology to identify patterns from the video feed. It helps security guards spot problems on the shop floor.

How did you come up with the idea for ThirdEye?
Raz: "I’d done a lot of work on computer vision at university and my Co-founder, Peter, did his PhD in it. We’d always thought that AI and computer vision were going to change the world. We built a flashy prototype that caught the interest of lots of companies. Then it was just finding our focus. In retail we saw a huge opportunity to save the sector a lot of money, but it wasn’t like a government where we’d worry about super-long procurement cycles."

At what point did you realise that ThirdEye had legs and that you’d be committing the next chapter of your career to it?
"When we started talking with one of the big supermarkets early on they gave us validation that we were solving a big problem. Theft costs brick-and-mortar retailers 30–50% of their profits every year, so we realised that if we could automate their CCTV cameras and detect it then it would transform their business. We thought, "If we can get this right we can build something really big.""

How do you find and retain talent in this competitive field?
"We built our core team through our own network of contacts, but that doesn’t scale for 20 or 30 employees, so for the next phase we’ll be using an in-house recruiting function. We prioritise passion over experience. If someone has decades of experience but their heart isn’t really in it, we’d rather take someone with no experience but who really wants to do it. What keeps people here is the idea of growing with the business. When you join a small company you really get to see the impact of your work."

What was your experience of building a team from scratch? What would you do differently if you were to do it again?
"We’re still doing it. We’re nine people right now but we’re hoping to go to about 30 by the end of the year. It’s important to manage expectations. There’s this idea that start-ups are all about sitting on a beach with a laptop and then the next year you make a billion, but actually it’s a lot of hard work. It doesn’t happen as fast as people think."

What came more naturally, pitching to investors or to retailers?
"At first I was much better at pitching to investors. I had a vision and a new technology and investors love that. We didn’t know so much about the retail sector. The second time round, once we’d got the initial investment, I found the opposite. My retail-selling skills had improved so much. After a year of doing it you understand your customer much better."

Do you see ThirdEye branching out beyond retail?
"Definitely. We think of ourselves as using computer vision to give workers better visibility in their environment. So that could apply to transport or hospitality – detecting if an escalator is blocked, or queues are building up. Eventually we should be able to detect when a crime happens in a public space. We can program the AI to look for very specific things, like someone carrying a gun or a knife." 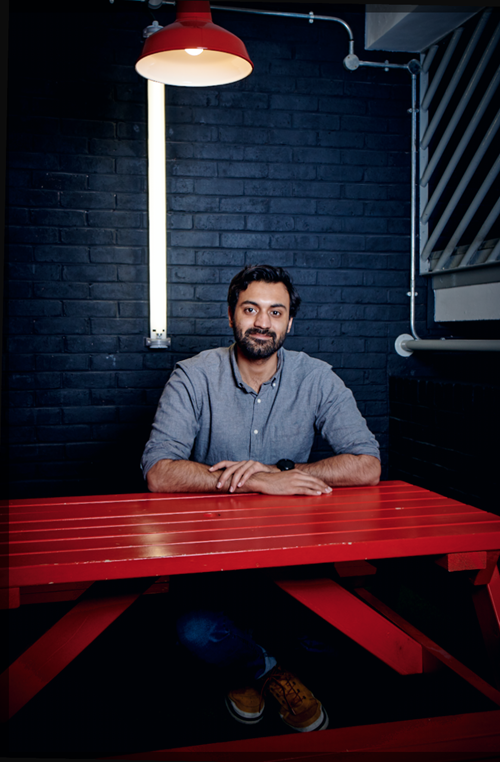 Should we be worried about public surveillance powered by AI?
"In Europe we’re protected by GDPR so we won’t be seeing the sort of facial-recognition tech that goes on in China. Otherwise we should be cautiously happy about the use of AI in public surveillance. There is a great potential for good – computer-vision systems operated by local councils that could detect when your bike is being stolen or your house is being burgled and then notify the police. Currently we don’t have the capacity to do that."

What’s been the biggest learning curve on your start-up journey?
"Neither of us have a ton of work experience, but running a start-up is so broad that no-one is really prepared for it. The most difficult thing is learning to balance the high-level strategic stuff with the low-level details."

What would you be doing if you weren’t running ThirdEye?
"Probably working at a different start-up. Maybe I’d be in an engineering team or doing products at another company. Not necessarily computer vision but definitely AI and sensors. I’m really passionate about this space."
What advice would you give to budding entrepreneurs in the AI field?"
Always focus on product and market rather than technology. AI is amazing, but what’s going to differentiate you is not whether you have the most accurate algorithm, but the problem that you’re solving and the product that you’re building to solve it. Think about product-market fit above everything else."

Why did you choose Workspace?
"We wanted a space where we could be creative and leave our stuff hanging around, but at the same time we didn’t want to commit to a two-year lease. So we have our own unit on a six-month lease on flexible terms and we’re not restricted in terms of what we bring in."

If you're thinking of moving your business to East London Works in Whitechapel, email us to arrange a viewing or find out which of our other buildings fit the location your looking for.