We speak to the man behind the pioneering retail platform maximising charity donations at Fuel Tank in Deptford. Hear how entrepreneur Joe Metcalfe has opened up a new way of giving to the online shopper, one Thrift+ box at a time.

The growth of online retailing is driving a new shopping experience. Ease of payment and increased choice via e-commerce has seen high street shops take a hit. And charity shops are far from exempt. In fact, 50% of people think a "healthy" high street should contain fewer charity shops, as reported by think-tank, Demos.

But what do these grave statistics this mean for donations? As shoppers opt for click-easy purchases, how can charities avoid missing out? Joe Metcalfe, Founder at Thrift+, spotted the need to "turn a brilliant act of generosity into something more effective," when he found out that charity shops make £1.4 billion revenue across the country every year, but only a small percentage of that is through online sales.

He left his job in 2014 in pursuit of a way to bring charity shops online. In 2015, he built and launched the UK's first Click & Collect app for high street charity shops. Since then, he has launched Thrift+, a revolutionary new destination for high-quality second-hand clothes.

Its business model is simple: donators are given a box to fill with unwanted clothes and accessories, they send it back to Thrift+ where items are uploaded to an online marketplace, and the revenue generated from sales is then sent to their charity of choice.

Now, proud to have raised £35,000 for charities all over the country, "the nice thing about Thrift+ is that people can generate money for any UK charity," says Joe. "Rather than having to drop clothes off at one of the big 10 charity shop networks that own over half of all charity shops in the UK, our donors can select any charity in the UK."

Be that a homeless shelter around the corner or a small charity set up by a friend, Thrift+ is flexible. "We get enquiries from five or ten charities a day - either from somebody who wants to donate to a charity that's not already on our list," says Joe, "Or, it's from a charity that wants to tell its customers about Thrift so it can raise more money."

And, due to the fact that it doesn't suffer from the additional costs of running a high-street shop, a higher percentage of sales is freed up to be donated. While an average of just 19% of money sold in charity shops actually ends up being donated to charity because of these extra expenses, Thrift+ is able to donate between one third and 50% of each sale. Good news for shoppers and donators alike.

But Joe had to make some plucky decisions to get to where he is today. Initially, business operations started out at his kitchen table before he chose to expand into a space at Workspace's Kennington Park. "We had a couple of local students who would help us to upload the clothes that we were receiving to the web and getting our first deliveries to Kennington Park was very exciting," says Joe.

"We set up an automatic printer so that every time we got a new order it would automatically print a new box label," he says. "It was fun the first weekend we came in on the Monday and it was just spewing out box labels as orders came in."

Within eight or nine months, the start-up was ready for its next big move and after some research they settled on Workspace’s Fuel Tank in Deptford. Initially Thrift+ was "bouncing off the walls" of the two spacious warehouse rooms they picked, says Joe. However, "It wasn't long before we'd filled it up with a photography booth, box storage, and office space," he says.

The new space has given Thrift+ the room to grow. "We've now got 10-12 local students from the area working for us part-time. That's 4 people on shift at any time uploading clothes and processing sales," says Joe. "This is why it's been brilliant to be in Deptford because you've got Trinity Dance Academy on the same street and Goldsmiths University close by. Deptford is a brilliant place to be." 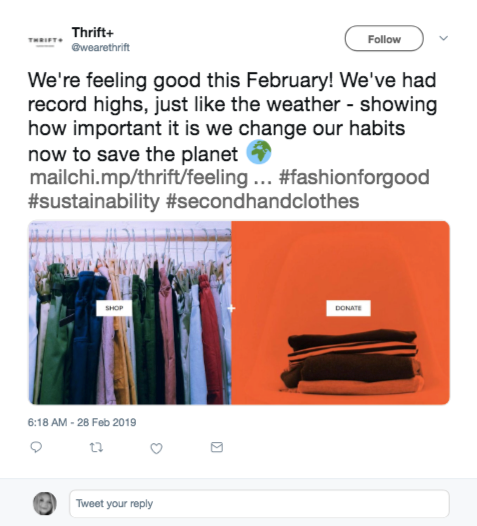 Do you want to join the thriving community of businesses in Deptford? Book a tour of Fuel Tank or explore our portfolio of 64 properties across London and make your mark on the capital.

If you're not ready for your own office space, you can find information on all our flexible co-working memberships too.­­­­­