We chat to Henry Milroy, Co-founder of Pan-n-Ice, based at Canalot Studios in Ladbroke Grove. He tells us how dreaming big can pay off and how he stumbled across a mind-boggling new way to serve ice cream.

When Henry and his friend upped sticks to backpack around Thailand, business talk was far from on the agenda. That was until they stumbled across a mind-boggling new way to serve ice cream.

On a fun night out in Koh Phi Phi, the friends spotted a man frantically chopping contents on a pan in the streets. The crowd of spectators proved something special was taking place. They soon discovered that it was in fact ice cream that the man was creating in front of the viewers' eyes.

He poured liquid contents onto a frozen pan at minus thirty degrees before transforming it into rolls of ice cream and frozen yoghurt in a matter of minutes. People were enthralled.

Henry instantly got to thinking. Why hadn't anybody brought this fun, theatrical and delicious display to the UK? Never one to sit back, Henry returned to London, bought a few machines and just got started!

With the Pan-n-Ice equipment up and running, Henry was ready to share the magic with the public in the summer of 2015. Their first stop was food markets and car parks across the UK. It was at this time the brand really started to grow and Henry realised they had landed on an idea that the public absolutely loved. 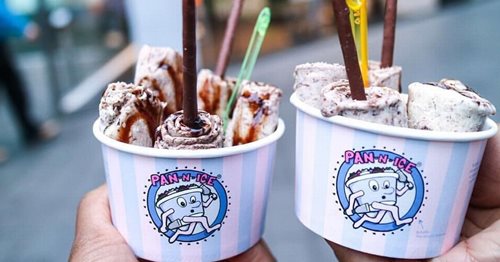 The stalls began to crop up at music festivals and retail locations all over the place and since have secured two permanent locations in Westfield London and Selfridges Manchester.

Something that Pan-n-Ice really prides themselves on is their brand, what they stand for, and how they operate. "That's why we post weird and wacky videos on Instagram that show our fun-loving nature," Henry says. "A lot of the time they go viral and act as a great platform to get our brand out there, without a huge cost."

The brand now has 1 million followers on social media with over 8 million views and likes on their social content video. On Instagram, they poured a bottle of Dr Pepper onto the pan and made it into an ice cream and it received 1.6 million views, and on TikTok combined dark Nutella with ice cream for over 2 million views.

Since the global pandemic hit, and the brand was forced to close its parlours, Henry decided to create a DIY kit so that customers could still enjoy the delicious Pan-n-ice treats from the comfort of their own home, and since then they have been flying off the shelves! Check them out here. 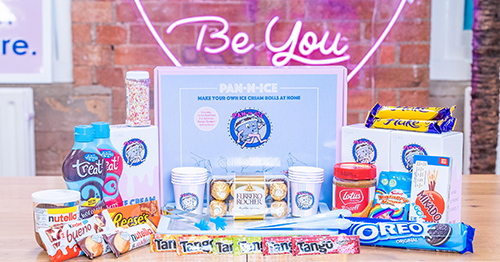 The company moved into Canalot Studios in West London in September 2017. "One thing that has been amazing about Workspace is how flexible and easy it is. For example, we outgrew our old office a while ago and went to a bigger one, the flexibility around that was great," he says. "There's great energy at Canalot, a really good atmosphere."

Find out more about what Canalot Studios could offer your business.